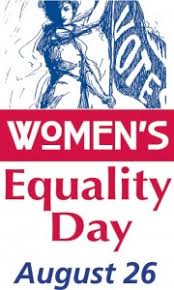 August 26 will mark the 97th anniversary of passage of the 19th Amendment to the United States Constitution – the Equal Rights  Amendment, which granted the right of women to vote. This, after it’s first introduction to Congress on behalf of Susan B. Anthony 42 years earlier! Ironically, in 1868, the 14th Amendment​ extended the right to vote for all male citizens and the 15th Amendment two years later prohibited governments from denying that right due to color, race, or previous condition of servitude. Still, women were precluded from this most basic of rights for many more years. ​You may also remember that Ms. Anthony was actually arrested for attempting to vote in 1872. ​Women’s Equality Day has been celebrated since 1971 as a result of a resolution submitted by well known feminist Bella Abzug​. The day is worthy of remembering and paying homage to all those who have worked and continue to work for women’s rights everywhere in the world.​